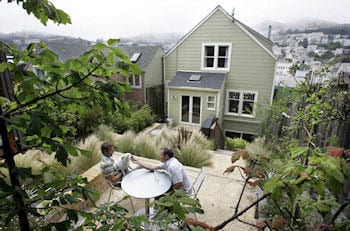 It wasn’t long after they bought their house in Noe Valley that Chris Harper and John Hathaway began to think about moving into something bigger than their two-bedroom, 1 1/2-bathroom Edwardian, built in 1913 for another world.

“The kitchen didn’t work well — it was dark and had a dumb, chopped-up layout that gave us no ability to move around,” Hathaway said.

“And we wanted a real guest room where people could stay,” Harper said.

They loved their neighborhood, though, and their hillside location with its sloped, often sunny garden. When they sat down with architect Michael Mullin, he told them they could stay put and have more space — by subtraction.

“The first idea,” Mullin said, “was to make an addition, but we felt that the neighbor notification and the Planning Department process would make that a longer and more costly project than it was worth.

“So, we decided to excavate under the basement and create additional living space below the house.”

By adding below the house, the couple would not have to spend more money bringing the rest of the house up to code — as would have been the case if they had added on top, Mullin said. And by staying within the existing 2,100-square-foot building (25 feet wide, 28 feet deep), Mullin achieved every San Francisco architect’s dream — symbolized by a clenched fist pounded once on the table.

“We were approved by the Planning Department at the counter,” he said, with no small measure of glee. “The stamp at the counter is a really great thing.”

Bryan Birmingham, the contractor called on to lift the house and suspend it while 4 to 5 feet of dirt was removed and a new foundation built, figures the decision cut many months off the design process. Frankly, though, the sight of their house jacked up and hanging on cribbing might have cut a few months off Harper and Hathaway’s life expectancy.

“When there was no foundation, I couldn’t stay 10 minutes — it was too freaky,” Harper said.

“I was just thinking, ‘Please, no earthquake now,’ ” Hathaway said.

It helped that Mullin produced his usual construction documents and administration, with detailed drawings of the interior elevations of every wall in every space, and reviewed these with both the owners and contractor. “This is a commitment of time on our part and of money (fees) on the owner’s part that really helped to make the job sing,” Mullin said in a follow-up e-mail dialogue. “Predictability is valued.”

It also helped that Birmingham’s done this sort of thing before, and even enjoys it. In fact, although he agrees that “the challenge is keeping the existing house intact,” he’s not sure why more San Franciscans don’t try it.

“If you drive around Noe Valley and see the number of homes perched 10 feet above sidewalk level, you’d be surprised,” he said. “It’s a good way to increase your square footage, or maybe to add parking. There’s just not much downside to it.”

Well, there’s the downside of the potential darkness below. Mullin’s determination to flood the house with light began on the new, open main living level that now has a glass-enclosed sun room front entry. The living room flows into a dining room that is open to the kitchen and island. In a nod to the house’s Craftsman roots, Mullin duplicated its oak flooring in the new kitchen and used walnut cabinetry from City Cabinets to echo the Craftsman tradition of built-ins. Limestone countertops and backsplash warm the space with touches of gold, and Hathaway’s aquatic color palette for walls both cheers and soothes. Hiram Banks lit the space for evening glow.

A skylight and French doors help create a light well next to the kitchen that opens out to the newly landscaped, triple-tiered garden with a Twin Peaks view from the top.

“This is one reason we decided not to move,” Hathaway said. “It’s a great yard.”

A black rock obelisk water feature anchors the base level, and Mullin points out the visual axis created from here through the kitchen into the front vestibule.

What’s also clear from the garden is how Mullin coaxed light into the basement master suite. Below the base level of the garden is a small, bamboo-banked terrace with sliding glass doors that bring light into the now 9-foot-high master suite’s reading area. Immediately adjacent to the well-lit reading area is the oversize steam shower, with privacy created by frosted glass to about 5 feet up; behind the reading area is the bed.

There aren’t any doors or full walls on the master suite floor, which has a two-person home office space lit by four windows on the side opposite the garden. (The house has a garage on the street level below.) So air and light flow through easily. The kitchen’s limestone and walnut are repeated here, as are the built-ins, chiefly with a 9-foot-long dresser opposite the bed and suspended off the floor and lots of counter space for easy packing and unpacking.

“The horizontal lines throughout the house give it a sense of order,” Mullin said, perched on the limestone platform bench built around the oversize spa tub. He notes the ledges above his head, the drawers beneath his seat, and also points out that Birmingham used the natural insulation product Icynene and installed radiant heating in the concrete floor, thus making the house more earth friendly.

Harper and Hathaway say the heating works fine, but they most like the way their subterranean master suite stays cool on warm, sunny days. Guests can bake upstairs in their old bedroom now, the new “real guest room” they wanted.

Of course, it would have been cheaper to put guests up in hotels; the project had been budgeted at $400,000 before Harper and Hathaway began adding renovations to the powder room and the landscaping to reach nearly $480,000. But they’re not looking to move anymore.

“I’m not prepared to say I’ll spend the rest of my life here,” Hathaway said. “But I think it’s good for a few more years now.”